Last week, I briefly wrote about “having the dizzies”.  The fact that I was experiencing this new symptom in addition to it being “slump week” for me, made it very difficult to stay focused and on task.  Thankfully, I was able to “just be” over the weekend.  I had my infusion on Monday, and life has returned to normal (whatever that is)….

Last week, I also posted, So…not what I was expecting….  Originally the post was going to be about the post op visit, but I got distracted.  So let me tell you now what I was not expecting.

I knew that they would be xraying my foot, but I did not expect to be climbing stairs for them to do so.  How the hell is that safe in anyway?!?!?  The doctor had ordered me NOT to put any weight on my foot without the CAM boot on, how did he expect me to do this?!?!?

I climbed the stairs with the boot on, tried to balance while taking it off, and hovered my foot over the xray table.  I held on very tightly (while standing on one leg) while the technician re-positioned the table numerous times.  When the xrays were done, I put the boot back on, and climbed off the table…..  Again, what the hell were they thinking?  How can this be a good thing?

After reviewing my xrays….. 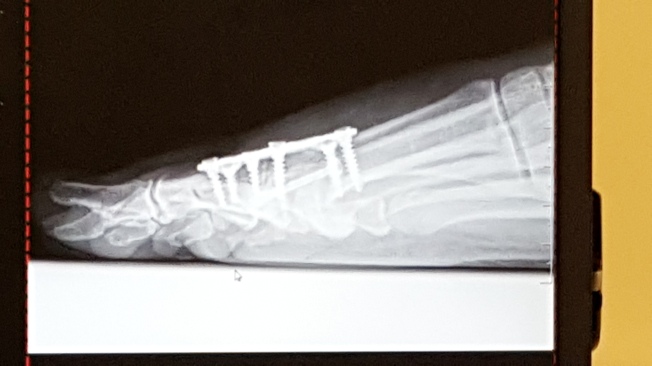 The doc says, “Everything looks like it is healing beautifully.  I want you to continue doing exactly what you have or haven’t been doing  (no driving, no weight bearing without the boot on, and then still limited walking) for another 3 weeks and then we are going to try to get you back into hard soled shoes.”  I also got the approval to sleep in a surgical shoe instead of the boot.  My hips and I are very thankful.

I am somewhat skeptical about being able to go back to normal shoes in this amount of time, but since I am no longer feeling any pain, I am trying to be hopeful.

Another thing that I DID NOT expect to hear was that I did indeed also have gout.  Although my blood tests showed almost no uric acid, when they performed surgery, there was an abundance of uric acid crystals surrounding the joint and the break.  Part of me wonders if this is one doctor trying to cover for the other.  I guess time will tell huh?

I will still be reviewing and in some cases re-sharing some old blog posts over the next couple weeks.  It’s kind of funny that I am the MS blogger, who rarely talks about MS though isn’t it?

So hard when someone says tell me about yourself...what do you want to know? View all posts by msgracefulnot

This site uses Akismet to reduce spam. Learn how your comment data is processed.