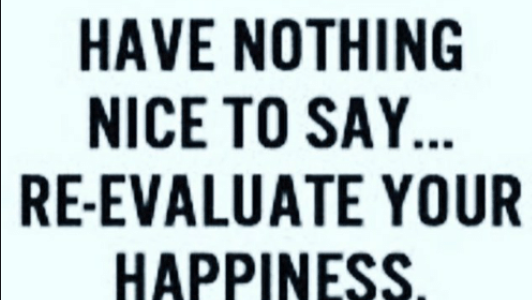 Here’s a novel idea…. Say what you mean and mean what you say.  Don’t have anything nice to say?  How about don’t say anything at all?

I am so tired of all the anger, meanness, and blame that some people are spreading in the world today.  I understand that fear and pain can bring out the worst in people, however that is NOT an acceptable reason to be cruel.

“But he/she did it first”?!?!?  What are you five?!?!  “Well everyone else was doing it!!!”  Ever hear the story about jumping off a bridge?  While I think my parents are incredible people, they are mere mortals, yet somehow they made sure I learned that two wrongs don’t make a right, and jumping off bridges because friends did it are NOT very good behaviors to practice.

Many people hide behind this “invisible shield” when they post things online.  They suddenly develop “balls of steel”.  Why is that ok?  And the name calling?!?!?  Seriously?!?!?

Because several states/countries that have been experiencing some form of “lockdown” due to Covid-19, are thinking about “reopening” or limiting restrictions that were placed on their citizens this week several people have been attempting to discuss their state or countries decisions.  I personally have been asked my opinion no less than 20 times.  Regardless of the specific question asked, my reply always includes the statement, “I am not afraid of getting the virus, (If it happens it happens) however, PEOPLE AND THEIR ACTIONS are scaring the hell out of me.

For the past 5 months, I have had a somewhat different (imo stricter) set of  restrictions placed on myself than most people have in the United States.  I have been mostly ‘confined’ to a wheelchair.  I couldn’t simply go for a walk.  I couldn’t drive myself to get groceries, or something that someone else cooked for me.  My outdoor excursions have consisted of visiting my doctor’s office, or the hospital for things that could not be completed online or over the phone. I bring my own restrictions up because I can honestly say I have not been an asshole to anyone.  I have not posted one cruel or hateful thing to anyone, but by the standards being accepted in society I would be ok if I did?!?!?  I don’t get it!

Yes I have felt alone and sometimes depressed, but NOW I am getting scared.  Scared that I am starting to dislike a lot of people.  Scared that if left to their own devices people will destroy themselves.  But mostly I am scared that I have started to believe that I will start handing people the rope.  (give “them” enough rope and they will hang themselves)  Isn’t that terrible?  I don’t want to become one of THOSE people.  (The ones that I am complaining about)

I strongly believe that you should practice what you preach, so I have been “quiet”.  I have been avoiding social media.

Maybe I have been “quiet” too long?