It probably won’t happen, but MAYBE… I should?

As I was getting ready to leave for my doctors appointment last week, I slid a pair of sweats on, and both of my dogs went to the door looking at me expectantly….“Where we going mom??!?!”  Note I did say SWEATS,  as in sweat pants, NOT my shoes, or coat.  The simple act of putting on my pants told my dogs that  I was leaving the house?!?!?!? 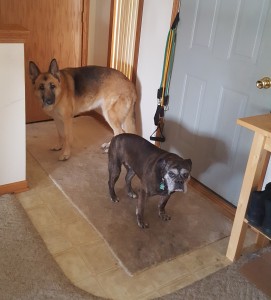 If you are a dog owner you have probably experienced this before when putting on your coat, or shoes, or whatever your “routine” is as you get ready to leave the house.  Admittedly though, I think for most people it is putting on your footwear.  This morning mine did it when they saw my pants in my hand??????

Ok time for a test.  The next day I put my tennis shoes on to walk on the treadmill, and received absolutely NO REACTION from the dogs.  Normally shoes would symbolize that you are getting ready to leave, but literally  NO RESPONSE!!!!!

(probably because I wasn’t wearing pants)

Later that afternoon, I remembered that I needed to take the garbage cans to the curb.  I grabbed my sweats, and again BOTH DOGS ran to the front door…..smh  Seriously?!?!?  I literally laughed out loud.

How do your dogs react when they think you are leaving the house?

Do they only do that when I put on sweat pants?  Would they react the same with Jeans or Leggings? Are they doing that because I chose to come out to the living room to put my pants on instead of my bedroom?

After a week of changing variables, I have concluded that when my dogs see me with pants on they think we are going somewhere.  ANY KIND OF PANTS!!! My “poor dogs”.

So now what? Stop taking them with me everywhere so they don’t think they get to leave the house when mom puts clothes on?

Do I have to start wearing pants all the time? Or do I just laugh it off and be happy that I am as important to them as they are to me?

The bond animals have with their humans is incredible.  I found another picture this morning of all 5 of my animals, (2 dogs and 3 cats) refusing to leave my bed after I had back surgery a few years ago.  Thing 2 literally had to drag them out of my room to feed them and take them outside to relieve themselves.

D.O.G. Waiting to be lifted into the car….not at all spoiled

I should probably mention at some point why I don’t wear pants.  Its simple really, I don’t like clothes, BUT ESPECIALLY pants.  The only reasons I wear clothing have to do with warmth and to portray some illusion of modesty.  (Ok I also don’t looking at my belly, which in my opinion makes me look several months pregnant)  Remember, no core muscles?!?  However, I am going to blame MS for this one.  While some areas of my body have lost “feeling”, ( like drop a 500 lb weight on my foot and I wouldn’t flinch), others have become SUPER OVER sensitive.  My left leg is an example of this.  When my pants move against my leg, it feels like bugs are crawling all over it…. EWWWW!  Very creepy!  Not to mention uncomfortable.

The second reason I blame MS, is bladder and bowel urgency.  I have rushed to the bathroom too many times to count and “not made it” just because of my inability to remove my bottoms quickly enough, so you see it’s easier to just not wear any, at least that’s what I will keep telling myself until the next embarrassing or “questionable” thing happens …. like my kids bringing friends home unannounced and yelling, “Mom?!?!?  ARE YOU WEARING CLOTHES?!?!?”…. smh.

I am sure my dogs will survive just as my kids did, but in the meantime I chuckle.  I hope you did too!